Visiting Vancouver in the summer was one of the best decisions I’ve made in 2018. This was my second time visiting Vancouver and it will not be my last! The last time I was here was just on a layover in 2017 on my way to Sydney. A 12-hour overnight layover to be exact. I didn’t get the chance to explore but flying in was like a feast for the eyes. The mountains contrasted against the ocean just drew me in, I knew I needed to come back. And that I did.

The Fairmont Pacific Rim is one of the most beautiful properties I’ve ever visited. Centrally located right on the Vancouver waterfront, you’ll have access to everything! The design, décor and culinary dining options are something to write home about.

Fairmont Pacific Rim exudes luxury in downtown Vancouver. The rooms are outfitted with luxury linens, Stearns & Foster beds, Nespresso machines, 24-hour in room dining, and spa-like bathrooms with television mirrors. Perhaps my favorite feature, aside from nearly every room having harbor and mountain views, of the room was the iPad2 device. Pacific Rim is the first hotel in Canada with these interactive devices. I was blown away when I started playing around with it. You can do nearly everything from this device. Not only does it control everything in the room (including the curtains) but you can also make spa reservations, order in-room dining, and access guest room controls. Outside of the rooms there is a gorgeous rooftop pool area and spa. 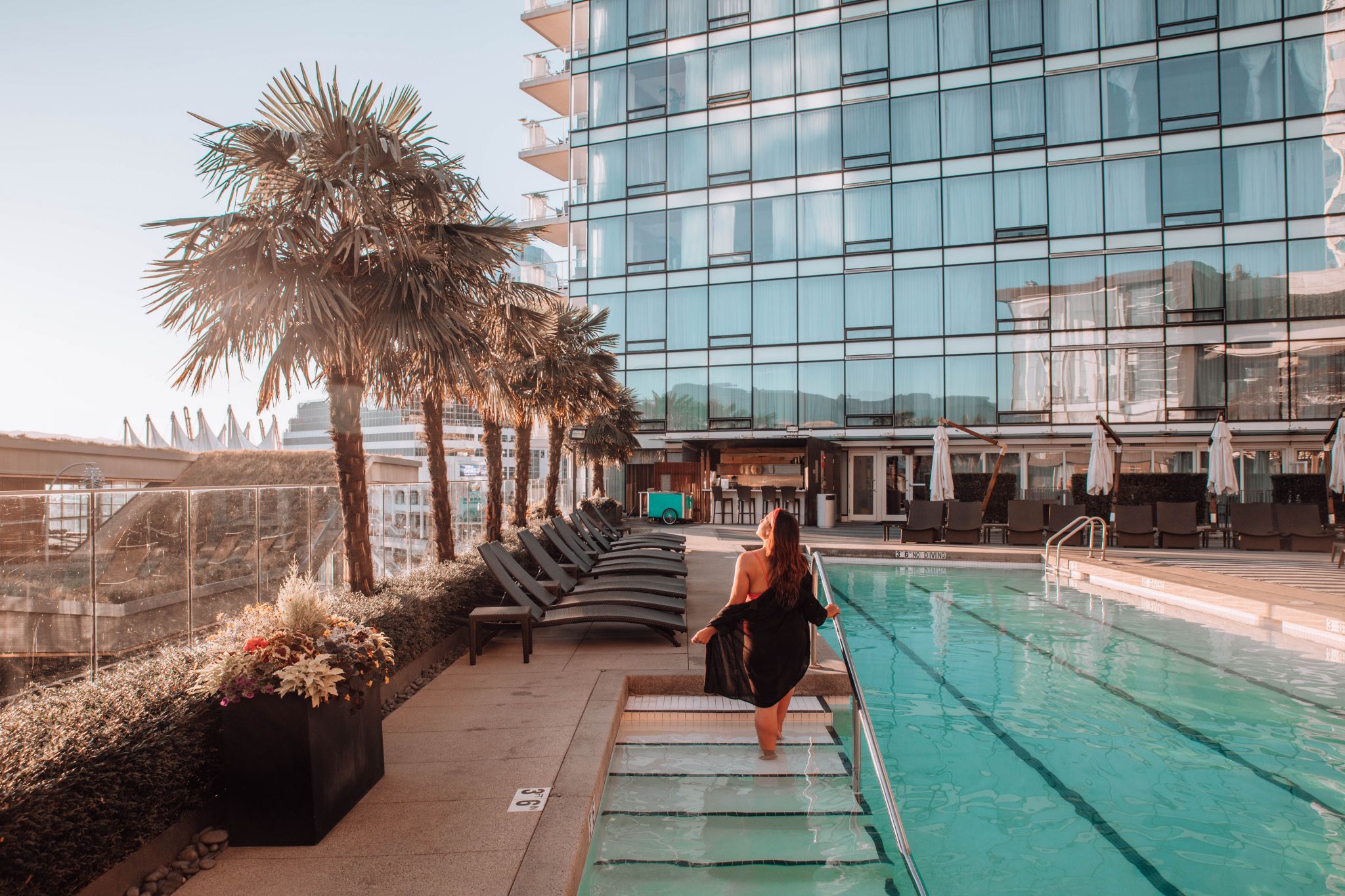 When I visited Pacific Rim, I was on the Stay and Taste Package. This package gives you a $50 dining credit at any of the three of the hotel restaurants (outlined below). It’s the perfect package for anyone but especially if you’re  in Vancouver to explore the city and surrounding parks! After a day full of exploring the last thing you want to do is return to the hotel only to leave again for dinner. PROBLEM SOLVED.

This trendy restaurant is a can’t miss and I totally get why. Within Botanist there are different venues all providing guests with different experiences. There’s the Cocktail Bar and Lab. I suggest starting the evening here and indulging in one of their signature cocktails, might I suggest the Birds Nest? Yeah, it is all about the presentation as you can see. The dining room + lounge is where you’ll enjoy dinner. And enjoy it I did. The staff are so knowledgeable about the dishes and they were able to make suggestions based on my dietary restrictions. This is SO important to me when dining out! And finally, the Garden. This space is Instagram worthy to say the least. Its’s covered in greenery from top to bottom, almost making it feel like you’ve stepped out of the city. This was my breakfast spot. Which the breakfast deserves 5 gold stars because it was both delicious and healthy!

The Lobby Lounge and Raw Bar

A great lunch spot if you happen to be on the property then. I highly recommend ordering from the sushi menu. The menu features some of your standard sushi options along with some of the Fairmont’s own touches and recipes.

This is exactly as it is described in its name: a café, eatery and market! This is great for those mornings you’re rushing out the door to explore. I grabbed chia pudding made with coconut milk for some pre-adventure fuel.

If I’ve learned one thing after staying at my first two Fairmont properties, Pacific Rim and Fairmont Chateau Whistler, it’s that they bring hotel dining to a whole new level. The chefs put so much thought into every single dish from breakfast to dinner and you can taste it in every bite! 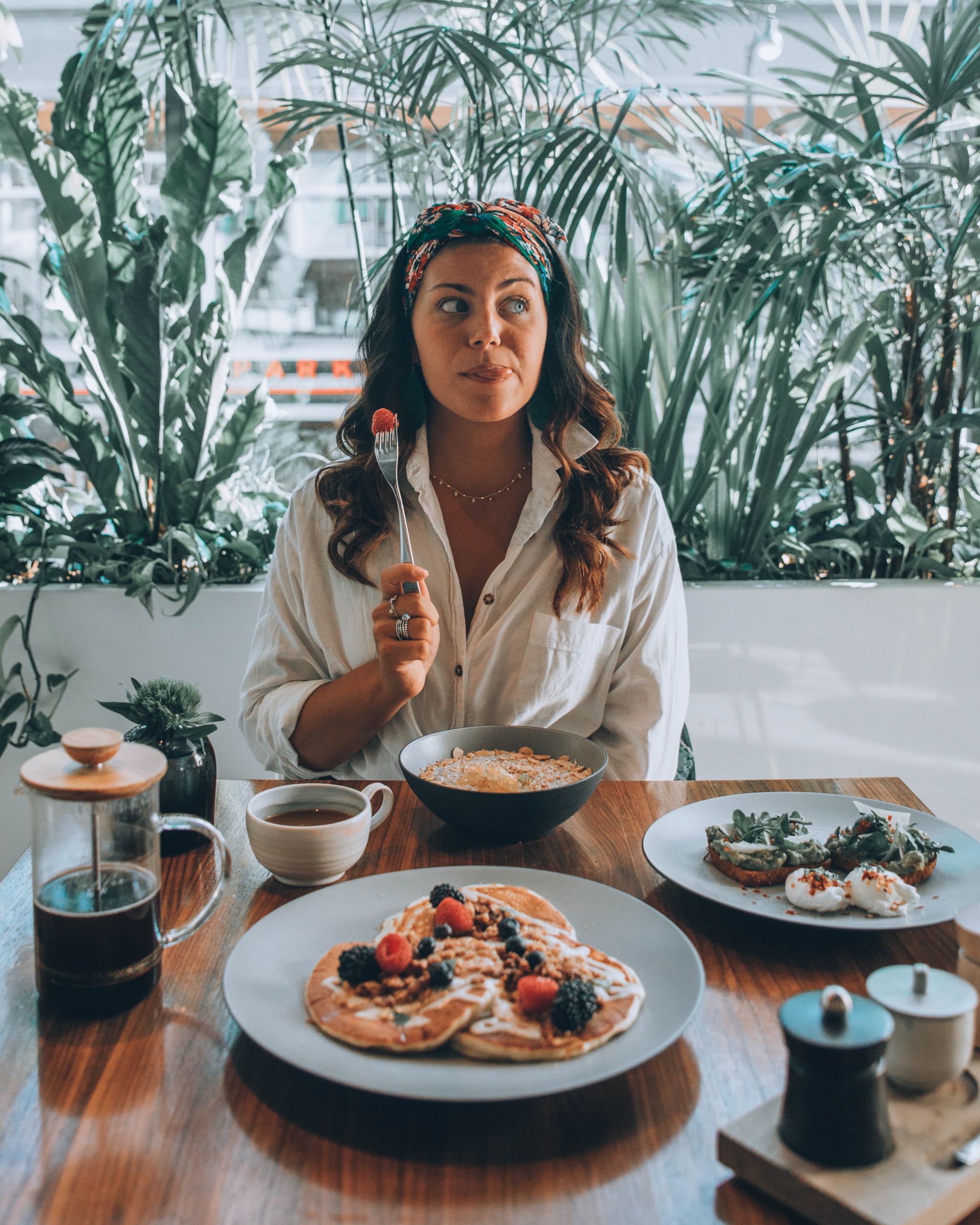 If you can manage to leave Fairmont Pacific Rim, I know it’s hard, there is so much to see. Although my time in Vancouver was ‘short but sweet for certain’ I managed to fit in a bucket list location and a few other spots! Let’s get to it.

This place was on my bucket list for as long as I can remember. Probably for as long as I’ve known about British Columbia. It did not disappoint. I suggest getting there early or later in the afternoon just before closing/sunset to avoid the mid-day rush. I went at about 4:30 and there were still heaps of people. If you’re looking for a photo opp, just be patient young grasshopper.

An alternative option would be to visit Lynn Canyon Suspension Bridge. There is no entry fee (compared to Capilano’s $46CAD entry fee) and I’ve heard its much less crowded. Probably because it’s a bit out of the city. I picked Capilano because 1. I’ve always wanted to visit and 2. there is a very convenient (and reliable) shuttle that runs from downtown Van to the bridge and back. 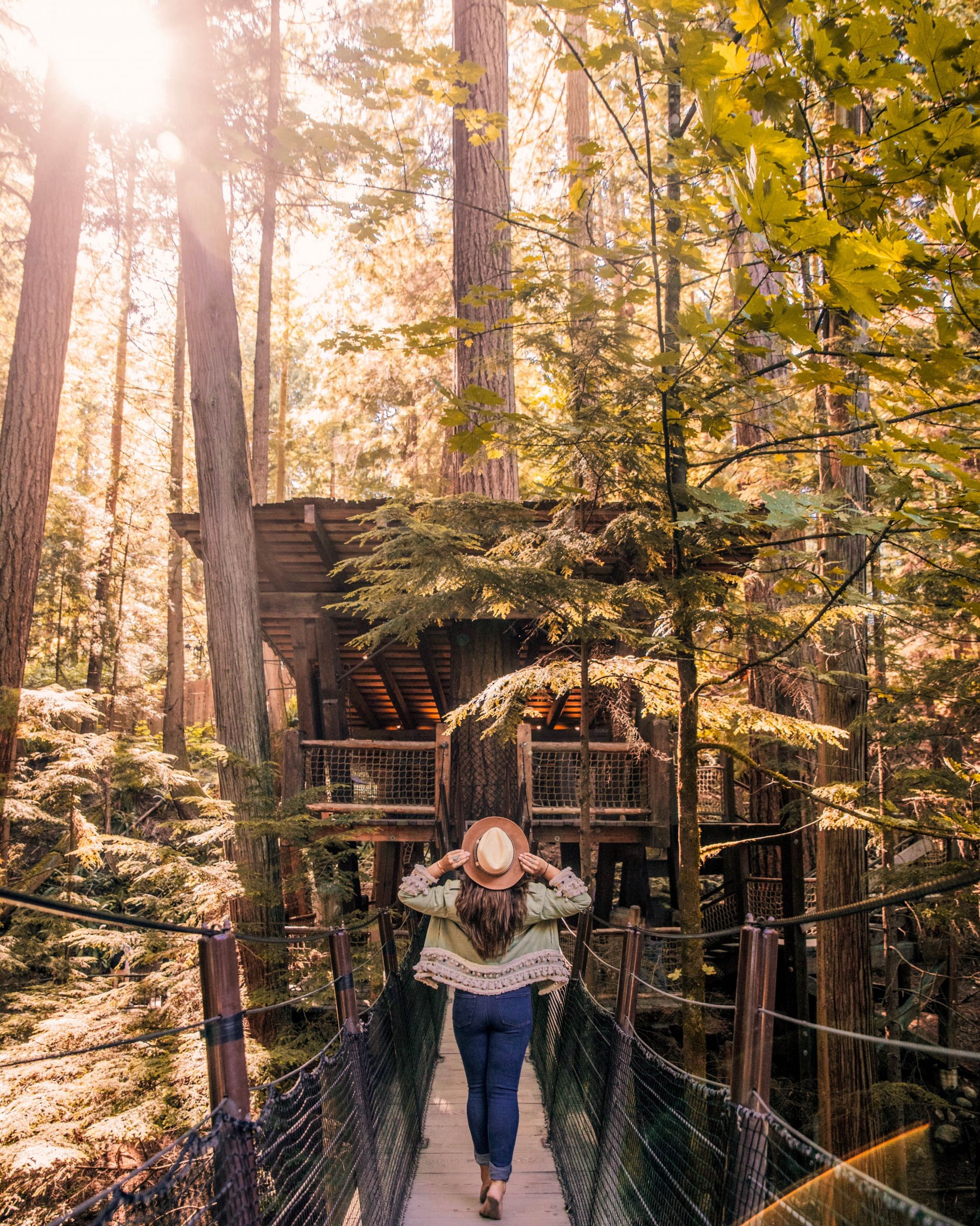 North Vancouver is well known for its hiking trails and mountains. This is where Grouse Mountain Skyride cable car is! I didn’t have nearly enough time to explore this side of Vancouver but I did have the opportunity to wander its streets and stumble upon the most delicious vegan café, Buddha-Full,  right next to Fun Alley.

Bike the Seawall and Stanley Park

I’d say your best bet is to dedicate the majority of your day biking through Stanley Park. It is incredibly picturesque and a great way to escape the city without really leaving, plus you can rent bikes right at Pacific Rim. My favorite scenic spot in the park is Siwash Rock, pictured below. Worth noting, the trail is a one way or the highway kind of situation. Bikes are only permitted to cycle in one direction should you bike the opposite direction, without the ok through the signage, you’ll most likely be yelled at by other cyclists. 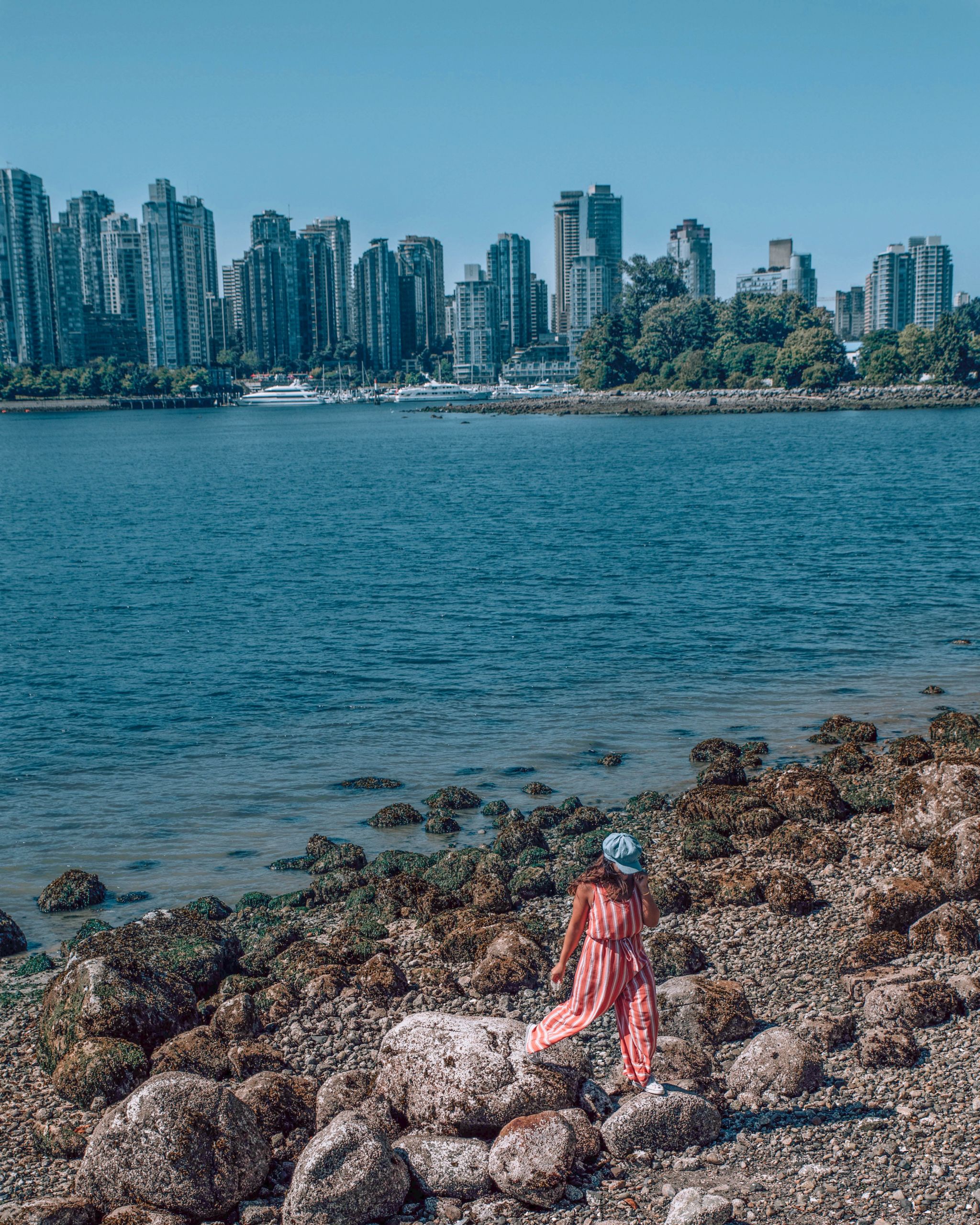 The shopping district! Also, the oldest neighborhood in Vancouver. Not too far from Pacific Rim I made it a point to see the steam clock. The what? Yeah, the steam clock. This clock is partially powered by a steam engine. Every 15 minutes, you can find passerbys stopping, watching the time pass until the clock steams. I could have lived without it if I am being honest.

Gastown combines old with new and this is most noticeable through the architecture. Walk along the cobblestone of Water Street, where you’ll find the Steam Clock and vintage lampposts. If you keep waking down Water Street you’ll find the statue of Gassy Jack Deighton, the man who started it all in Gastown. You can also find the Vancouver Lookout in Gastown, might I suggest this for a birds eye, 360 degree view of this beautiful city?

Like I said before, my time in Van was short so I didn’t have a ton of time to explore the foodie scene but here are the two spots I loved.

I mentioned this before but this is my go to plant spot in North Vancouver! It was so damn delicious and just what I needed in the heat!

About a 5-minute walk from Fairmont Pacific Rim is this little plant based restaurant. Think vegan/vegetarian food Chipotle style. It’s a great grab and go spot so you don’t miss out on any exploration! I recommend grabbing your bowl and heading to the waterfront or packing it to go on a bike ride.

Once I landed after a very long travel day the last thing I wanted to do was think about navigating the SkyTrain to the center of the city. I chatted with someone in the customs line who had visited before and recommended the SkyTrain over a cab/Uber because it would be faster and about $30CAD cheaper. My main qualm with public transport fresh off a flight is that I travel with so much luggage and oftentimes there are no escalators/elevators which make it incredibly difficult for me to even access subways. Then I start to sweat, people stare, I get frustrated- at which point it is not even worth the hassle. But the SkyTrain at YVR was easily accessed (escalators and elevators) and the stops are all pretty straightforward. Plus, it was just $10CAD to the waterfront! Once you’re at the waterfront, Fairmont Pacific Rim is just a 5 minute walk from the station.

Have you been to Vancouver before? What did you get up to? Taking notes for my next visit which will definitely be longer!

This post is written in partnership with Fairmont Pacific Rim however, as always, my opinions are my own.